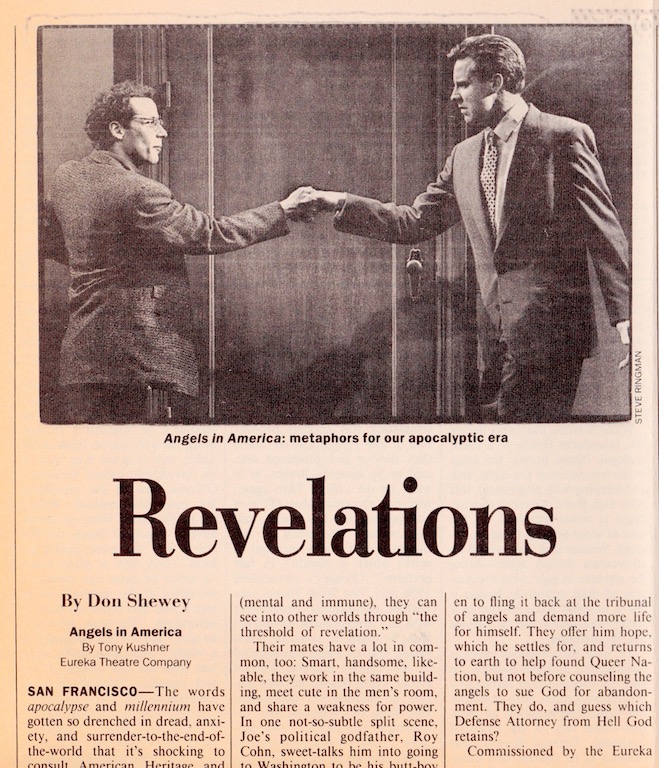 SAN FRANCISCO — The words apocalypse and millennium have gotten so drenched in dread, anxiety, and surrender-to-the-end-of-the-world that it’s shocking to consult American Heritage and discover the benignity of the dictionary’s literal definitions: “a prophetic disclosure or revelation” and “a hoped-for period of joy, serenity, prosperity, and justice.” In his two-part AIDS epic, Angels in America, Tony Kushner acknowledges decay and deterioration as the operative metaphor for our apocalyptic era: the eroding ozone layer, collapsing immune systems, governments corroded by individuals’ self-interest, evanescent faith. Yet, holding to the essential meaning of apocalypse, Kushner locates the opportunity for revelation in the saga of Prior Walter, a 30-year-old man with AIDS, who steps into the role of unlikely prophet and sweeps along with him his Jewish word-processor boyfriend, his black drag-queen best friend, a gay Mormon, his missionary mother and pill-popping wife, a lesbian night nurse, and, oh yes, Roy Cohn.

The play’s eight acts take place between January and August 1986 in New York City (the epilogue jumps to 1990), with side trips to Salt Lake City, Moscow, and Heaven (said to be “a lot like San Francisco”). Part One, Millennium Approaches, focuses on two couples in crisis, one gay and one Mormon. Terrified by sickness, Lou abandons Prior after his diagnosis; as a reward for years spent writing a doddering appeals-court judge’s opinions, Joe gets a Washington job offer that forces him to confront the problems in his marriage to the hapless Harper. Domestic drama isn’t Kushner’s goal, though. Things get flippy right away. Harper, who takes Valium “in wee fistfuls,” hallucinates herself into a daydream of Prior’s, and they bond as soul sisters. Because of their deficiencies (mental and immune), they can see into other worlds through “the threshold of revelation.”

Their mates have a lot in common, too. Smart, handsome, likeable, they work in the same building, meet cute in the men’s room, and share a weakness for power. In one not-so-subtle split scene, Joe’s political godfather, Roy Cohn sweet-talks him into going to Washington to be his butt-boy at the Justice Department while Lou gets brutally plowed by a stranger in Central Park. The two couples, portrayed in complicated and intimate detail, form a canvas on which Kushner sketches the widening implications of love and betrayal. But the stage is dominated by Roy Cohn, a tour de force role: flagrantly unpleasant, shrewdly seductive, the Devil incarnate.

The first play ends with the arrival in Prior’s bedroom, amid ceiling plaster and otherworldly lighting (“Very Steven Spielberg!”), of the Angel who reveals his destiny as a prophet. The second play, Perestroika, is dominated more by Prior and the Angel and departs almost entirely from what little semblance of naturalism the work had previously clung to. For one thing, we are suddenly greeted with a crew of Politburo denizens (including Aleksii Antedeiluvianovich Prelapsarionov, the world’s oldest Bolshevik), who begin each of the play’s five acts with a scene of comic cacophony that somehow recalls both Chekhov’s vaudevilles and Robert Wilson’s knee plays. [Note: these scenes were cut from Angels in America and became part of a subsequent Kushner play called Slavs!] Harper takes to spending her days at the Mormon Visitors Center watching mannequins reenact the church’s founding when they’re not lapsing into scenes of her husband’s affair with, you guessed it, Lou. Prior’s drag buddy, Belize, gets hired as private duty nurse for Roy Cohn, who on his deathbed encounters the ghost of Ethel Rosenberg; after Roy dies, Ethel and Lou say Kaddish over his body while Belize steals for Prior the stash of AZT acquired for Roy by his friend Nancy Reagan.

Meanwhile Prior, given a gospel to espouse called “The Anti-Migratory Epistle,” travels to Heaven to fling it back at the tribunal of angels and demand more life for himself. They offer him hope, which he settles for, and returns to earth to help found Queer Nation, but not before counseling the angels to sue God for abandonment. They do, and guess which Defense Attorney from Hell God retains?

Commissioned by the Eureka Theatre Company (San Francisco’s most politically astute theater), workshopped at the Mark Taper Forum and the Sundance Institute, and produced with the help of a special grant from the NEA and the Fund for New American Plays, Angels in America (subtitled “A Gay Fantasia on National Themes”) takes more than seven and a half hours over two evenings to perform. This is a play with impressively, dangerously high ambitions. I walked away exhilarated, not quite sure what I’d seen but willing to get all opinionated about two things. Angels in America is a landmark not just among AIDS plays or gay dramas but in American theater — partly because Kushner has the audacity to equate gay concerns with the fate of this country. And although it’s only his third produced play (following The Illusion and A Bright Room Called Day), Angels in America establishes the 34-year-old Kushner as the most important American playwright to emerge since David Mamet — a poet and moral visionary in love with the theater yet awake in the world, who aspires to combine history, sex, and politics with the density of Caryl Churchill or John Guare.

Unlike, say, Torch Song Trilogy, which bravely and unapologetically revealed gay life to the straight world, Angels takes in the whole world from the specific, peculiar, privileged viewpoint of homosexuals. Privileged because the gay world has been living with AIDS for more than a decade, and as the enormity of AIDS as a medical, political, economic, and spiritual crisis has sunk in, the gay community continues to provide moral leadership. And unlike other AIDS plays, Angels dares to seriously treat the epidemic as divine instruction. Not as a “blessing” or “an opportunity for growth” — the platitudes by which the healthy try to protect the afflicted from the terrifying shadow of death — but as a planetary challenge to bring about a spiritual transformation or else.

Needless to say, in a time and society as deeply suspicious of overt spirituality as our own, it takes beaucoup de courage to write a play that addresses these matters openly. Kushner gets away with it by treating the material not as tragedy but as divine comedy. Whether pondering the Tao of AIDS or debating with Talmudic intensity the relationship of man’s law to divine justice, his characters almost compulsively undercut their emotions with campy gay humor and Jewish vaudeville shtick. The playwright makes excellent use of the epic form, which provides a narrative structure on which to hang ideas like punching bags for the characters to batter from all sides. Like Wally Shawn, Kushner rarely uses characters as his own mouthpiece; rather than having someone say the right thing, he lets attractive characters speak in favor of Reagan’s social policy or “tough love” and (as Brecht advised) leaves it to the audience to talk back.

I can hardly do justice in the space allotted to David Esbjornson’s first-rate production or the generous, frequently astonishing acting ensemble. For various reasons, the Eureka mounted a full production of Millennium Approaches and presented Perestroika as a work in progress. (Kushner is apparently still working on the final version of the play, which will be seen in more complete form next season at the Taper in Los Angeles; it may be seen in New York at the Public Theater or New York Theater Workshop.) Certain scenes were almost fully staged, other read from chairs with scripts in hand, and still others not performed at all but simply summarized (“Scene 12: The Angel appears in black, Prior ascends to Heaven, and the Angel gives Hannah an orgasm”). The cabaret informality turned out to be not just a happy accident but an inspired touch that future productions might wish to retain. Rather than detracting from the play, it reinforced Angels in America‘s most millennial qualities. When some revelation is surely at hand, it’s time to stop looking at the scenery.