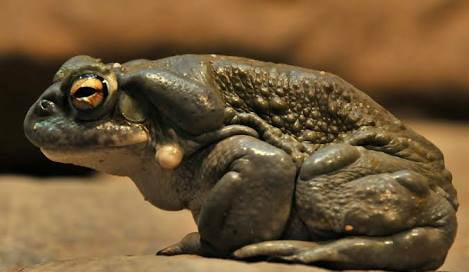 I traveled to Mexico City last month to attend the World Bufo Alvarius Congress (WBAC), bufo alvarius being the name of a toad species native to the Sonora Desert that secretes a substance that when dried and smoked creates a powerful psychedelic experience. When synthesized in a laboratory, the compound is known as 5meo-n-DMT, somewhat related to dimethyltryptamine (DMT), which is produced by the human body and many plants and is the active ingredient in ayahuasca. The gathering in Mexico City July 27-29, 2018, was the first of its kind to assemble in one room a few hundred people who had all experienced this sacred medicine – “the indigenous peoples, the practitioners, the scientists, the anthropologists, and the psychonauts – the now-global toad family whose lives have been touched by this most powerful of entheogens,” as the website described the target audience. “Join us for three days of lectures, panel and group discussions, and films by the leading experts in this nascent field…to address the pressing issues of toad conservation, ethics, best practices, and sustainable alternatives, and to explore the limits of both our science and our spirituality. What’s more, it is also a much needed gathering to discuss the power and responsibility of using this unique compound, and to find ways in which we can grow as an educated and unified community.”

I attended the congress partly out of professional interest, since I’m engaged in a year-long training in psychedelic-assisted psychotherapy. But I suppose I also fall in the category of psychonaut, someone with a passionate curiosity to explore these medicines for the sake of spiritual growth and self-awareness. Less well-known, less studied, and less widely available than other psychoactive compounds (LSD, psilocybin, MDMA, ayahuasca), 5meo or “toad medicine” has the distinction of being extremely powerful, extremely fast-acting, and short-lived. When you smoke it, by the time you exhale the effects overtake you completely, and yet in 30 minutes you are completely back to normal, left to digest your journey over the following days and weeks. Many people describe their experience as one of encountering God, dissolving ego, merging with infinity, glimpsing eternity, returning to source – an awesome journey worthy of tremendous respect and humility.

Organized by Mario Garner, Sandra Gancz, and Rak Razam (two Mexicans and an Australian), WBAC devoted the first day to the themes of “global perspectives” and “protecting the toad.” An opening ceremony conducted by native practitioners prayed for “using the toad to heal the world with love, tenderness, and compassion.” Victoria Ochoa, representing the Yaqui people of the Sonora Desert, spoke with exquisite eloquence while juggling and nursing her young son. She addressed the severe realities indigenous peoples face defending their territory against a predatory system. The Sonora River is polluted by agricultural companies who don’t acknowledge the damage they’re causing, and those who defend the land fighting for water rights are criminalized. She pointed out that it’s no coincidence during this period of activism the indigenous population has been inundated with crystal meth. She said tons of toads have been taken away to other states. “This is a vulnerable stage. Don’t take the toad!”

Leo Bondani showed excerpts from his film OTAC and the Sacred Ancient Medicine Ceremony, which includes some basic information about the bufo alvarius toad, which lives underground in hibernation for nine months of the year. At the first rainfall, the toads come up to mate and feed for three months, absorbing water through their abdomens rather than drinking through their mouths. The film traces toad awareness through archaeological remains and indigenous artwork throughout history and conveys information about the impact of toad medicine in terms both scientific (when smoked, 5meo replaces serotonin as a neurotransmitter/neuromodulator) and poetic (it cleanses the heart and mind, “opens the heart to the sun”). 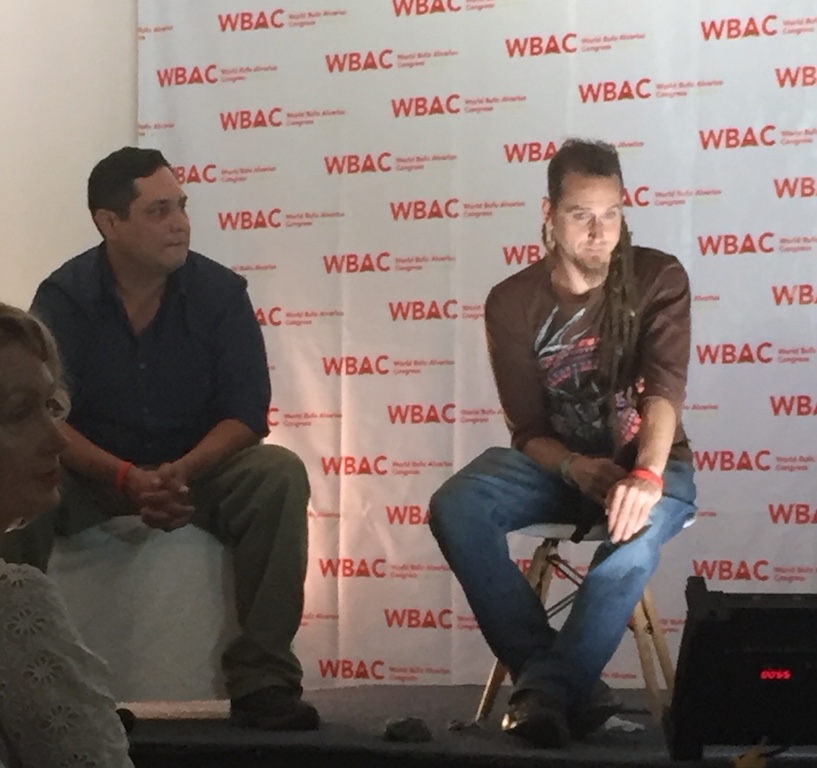 Mario Garner (above left) interviewed a guy named Corbis (above right), a legendary figure in the bufo world who is credited with being the first person in modern times to milk the toad and provide the medicine to doctors. Corbis joined the chorus of voices decrying the practice of enslaving toads for business in captivity – he insisted that they must be kept free and wild, and poachers must be boycotted. Ecologist Kirra Swenerton noted that toads are bonded to the land where they first breed. If you move one, it will try to return. Left alone, they generally travel no farther than 4000 meters. Once taken from their homes, toads cannot be returned to the wild because of the danger of transmitting diseases. Not for the first or last time at the conference, practitioners were exhorted to be responsible about posting images online of bufo ceremonies. (More on that subject later.)

The afternoon session focused on practitioners and their perspectives on working with toad medicine. Pit Prieto emphasized the importance of intention and using your mind to control the experience. He named several uses for the medicine: connection with Source; cleansing; healing; programming/deprogramming. “Medicine can help you learn or remember how to call certain spirit and animal energies.” Flor Bollini talked about how the medicine is sometimes served in a brutal way, encouraged female practitioners to do what they feel rather than what they’re taught, and advocated progressive microdosing to discover what amount “would make you open to God.” Tricia Eastman spoke practically about core competencies for facilitators and proposed a neo-shamanic medicine wheel. 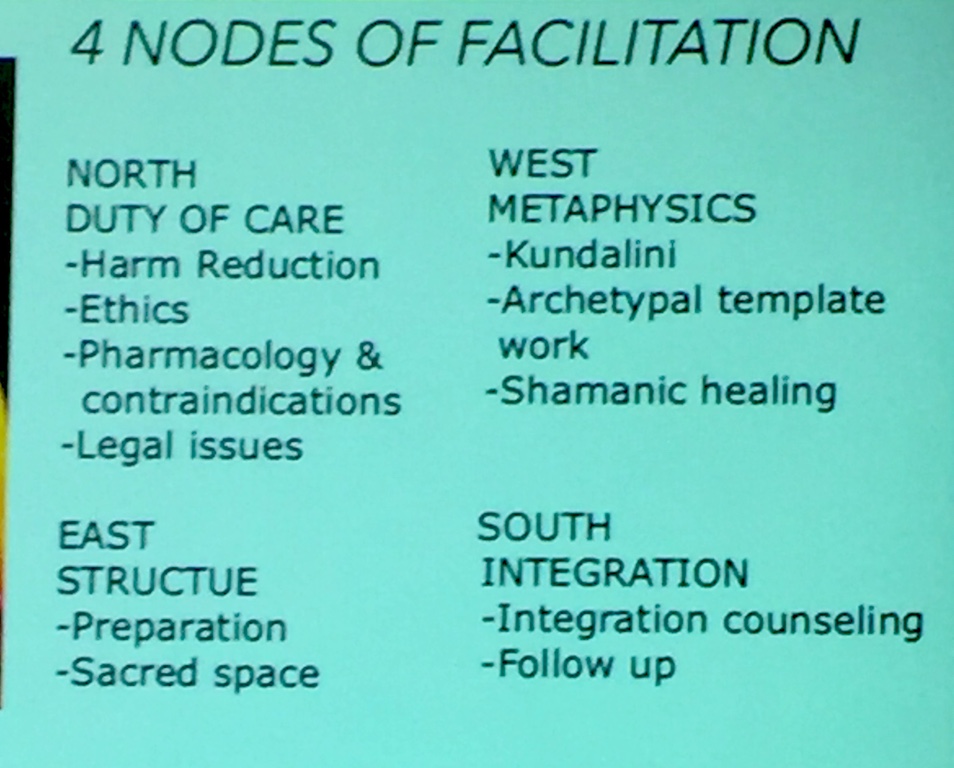 The session ended with a panel discussion of “Facilitators’ Ethics and Code of Conduct,” bringing together the practitioners who had just spoken along with Hal Lucius Nation, representing the Temple of Awakened Divinity (TOAD); Dr. Martin Ball, who hosts a podcast called “The Entheogenic Evolution”; and New Zealander James Oroc, author of the best book on 5meo (Tryptamine Palace), which he refuses to refer to as “medicine.” 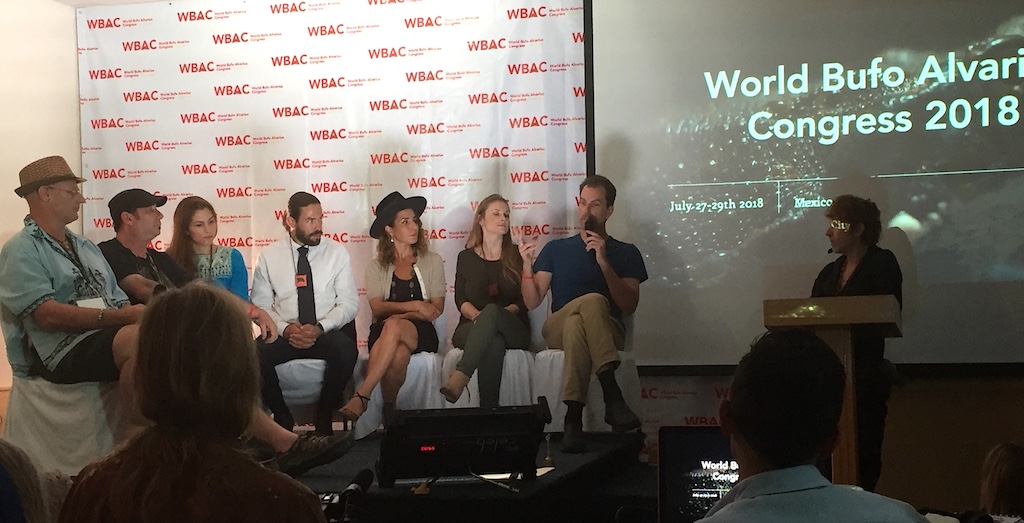 Moderated by Rak Razam (above, far right), the panel turned into a mini-intervention with Dr. Octavio Rettig Hinojosa (above center, in white shirt), one of the few bona fide celebrities in the bufo world and a controversial figure. On one hand, he is the renowned author of The Toad at Dawn, an informative and extremely personal account of his journey with sacred medicines. Rettig has traveled the world introducing people to toad medicine. He made a star entrance at the congress, greeted ecstatically by many appreciative acolytes, and he features heavily in Bondani’s film conveying the history and indigenous origins of this and other sacred medicines. On the other hand, he has been widely criticized for questionable practices.

The other panelists gently confronted him about allowing videos taken during ceremony to be posted on the internet and his rough interventions with people incapacitated by the medicine (pouring water into their mouths, conducting ceremony outdoors in unsafe settings, using an electrical device to zap people while they’re journeying, as seen in this disturbing YouTube video: https://www.youtube.com/watch?v=ioAYzGcoWKk). Rettig responded with defensiveness, shouting angrily, charging around the room, and lashing out at those who raised objections to his manner: a deeply unattractive performance. The more he was pressed to listen to criticism, the more he stonewalled, until the tension in the room became so high that the elegant European woman behind me, a Rettig champion, literally screamed at the top of her lungs. 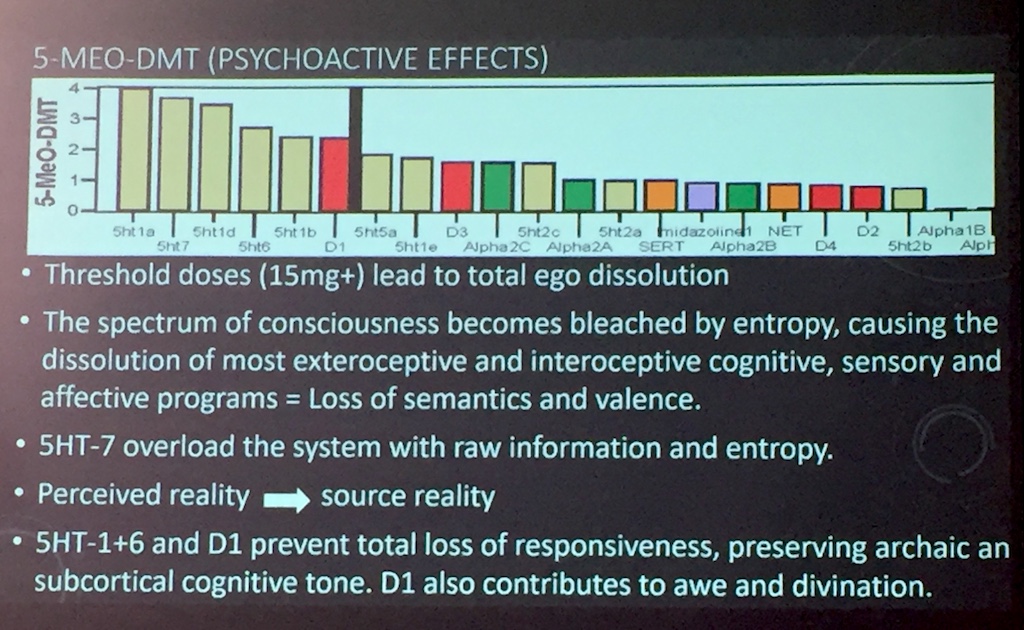 Saturday morning’s session focused on toad science. Panelists, many of them doctors, shared what has been learned about the effects of the medicine on the human brain. (above: research presented by Dr. Joseph Peter Barsuglia; below, research by Dr. Jack Alloca) EEG readings suggest that smoking the medicine puts the receiver in a high-gamma state, related to compassion, consciousness, and coherence. While 5meo-n-DMT can be synthesized in pure form, bufo contains not only 5meo but additional alkaloids that provide a subtle entourage effect. The medicine can be classified as a dissociative (like ketamine and unlike, say, psilocybin). The therapeutic risks and benefits were discussed. While the medicine is active, brain functioning is decentralized so it is essentially processing everything at once. This can create trauma for people with local brain injury, and it’s terrible for people with OCD. At best the sense of ego dissolution can create a peaceful oceanic consciousness. At the same time, the brain doesn’t like to change, so afterwards it tries to return to homeostasis, and something to watch out for is the ego getting strengthened upon return. 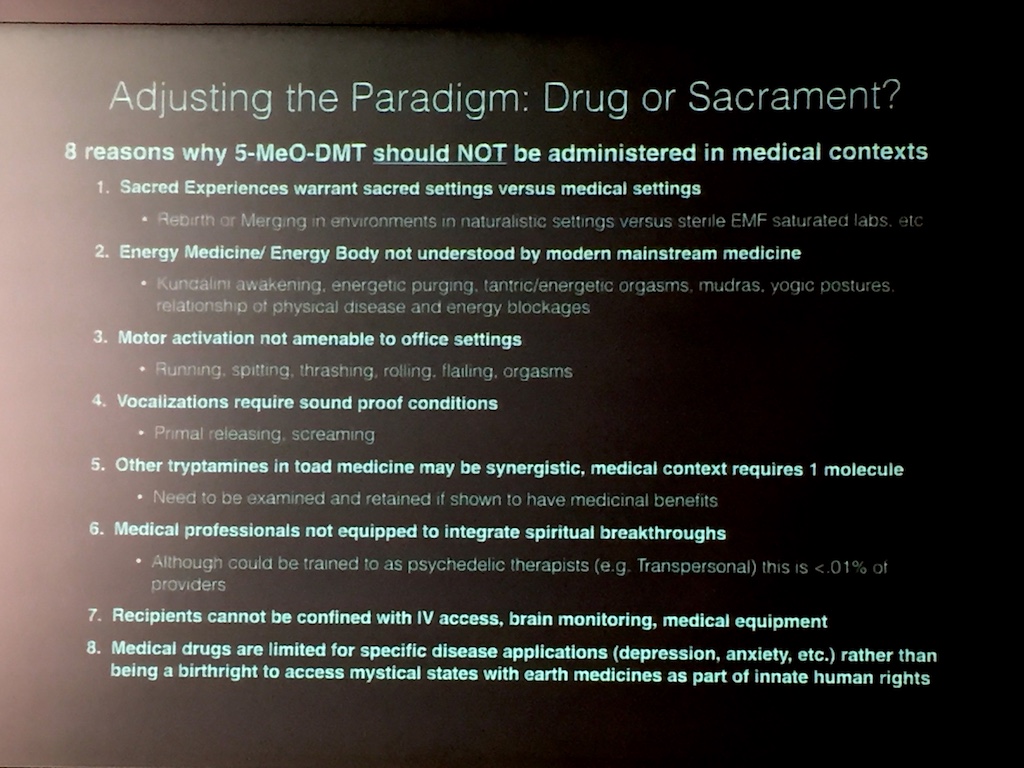 The afternoon concentrated on spiritual uses for bufo. Yannina Thomassiny said the #1 enemy is misinformation (“be careful posting videos and including people’s names”), encouraged preparing with silence and meditation, and like most facilitators advocated integration as key to the experience of doing the medicine, whether taking it with psychiatric intent or to meet your inner self. Rak Razam mentioned that it took him eight years to integrate his first encounter with 5meo. He posed the very good question: once you’ve had a powerful experience with this medicine, why keep doing it? His answer for himself is “to establish a relationship with the state of consciousness.” (I’m always mindful of Alan Watts’s sage counsel: “When you get the answer, hang up the phone.”)

I skipped the Sunday morning presentations on “Integration Practices for Mind, Body, and Soul,” since I’m in the midst of a year-long training on this subject. But I couldn’t miss the final session of the congress, a community forum that wound up revolving around the hot topics of toad conservation, the problem of untrained facilitators, and questionable practices by practitioners. More high drama involving Octavio Rettig: Victoria Ochoa, again speaking with impeccable groundedness, clarity, and humility, directly confronted him for never admitting to being wrong or making mistakes. She then proceeded to name several: giving medicine to underage individuals against their parents’ wishes, claiming (incorrectly) to have permission from tribal governments to conduct ceremony using indigenous chants, being verbally abusive to participants, and so on. Rettig brought his chair and sat directly in front of her, but instead of responding with remorse or accountability he did nothing but defend defend defend. At least a dozen people nearby recorded the confrontation on their smartphones. 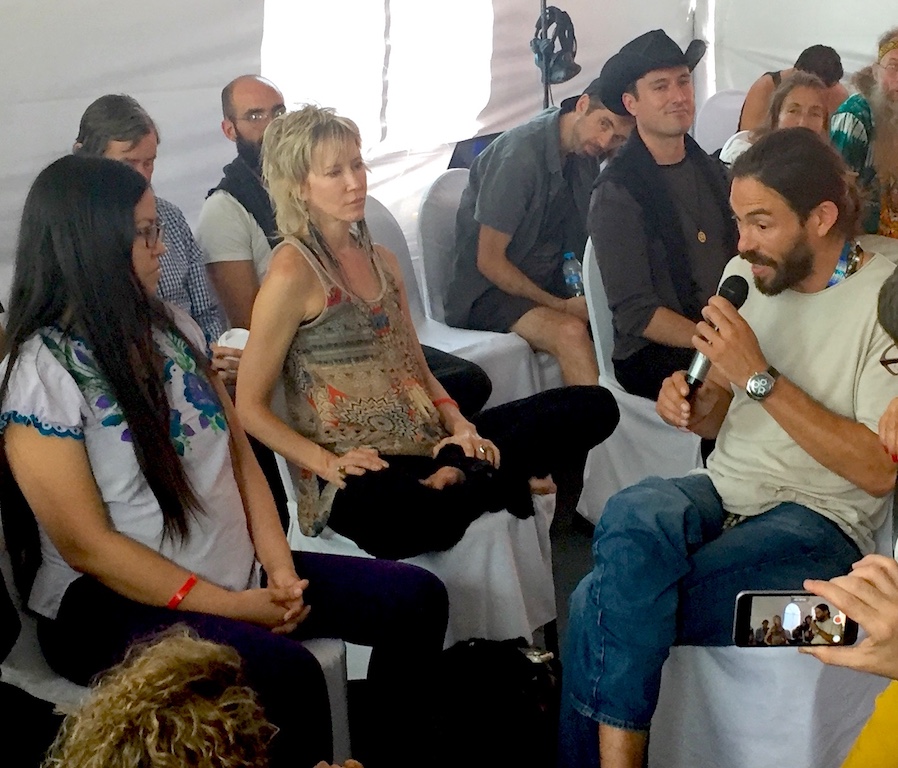 Someone mentioned in passing that this conference was boycotted by the psychedelic community. I wondered what that was about and only a week or two later did I stumble on a Facebook post from July 18 announcing that another well-known and controversial facilitator, Dr. Gerry Sandoval, had been disinvited from speaking at the congress because of serious allegations of abuse, including rape. I learned that “Dr. Gerry” had been a guest on Hamilton’s Pharmacopia, the Vice network series hosted by Hamilton Morris (son of documentary filmmaker Errol Morris). The episode on toad medicine showed Dr. Gerry doing ceremony with a series of individuals (all guys) outdoors by a creek surrounded by boulders. Anyone knowledgeable about this medicine would cringe watching this cavalier activity under unsafe circumstances. It would be like a cardiologist doing open-heart surgery at Burning Man to show off.

In the community forum, Rak Razam spoke about the illusion that it’s easy to facilitate ceremony. “You get access to medicine, a pipe and a lighter. Without training, your learning curve can hurt people. Ask for help. Receive the help that’s offered. Many of us work for free healing wounds made by other facilitators.” And a Seri elder named Alberto provocatively asked how many in the room are tourists, meaning “You took medicine with a shaman, snapped a selfie, then went and started facilitating ceremony.” He outlined what traditional shamanic training entails: sitting with a shaman for many ceremonies, being supervised, getting approval before setting out on your own. “When you smoke, you must remember your responsibility and your connection to your lineage.”