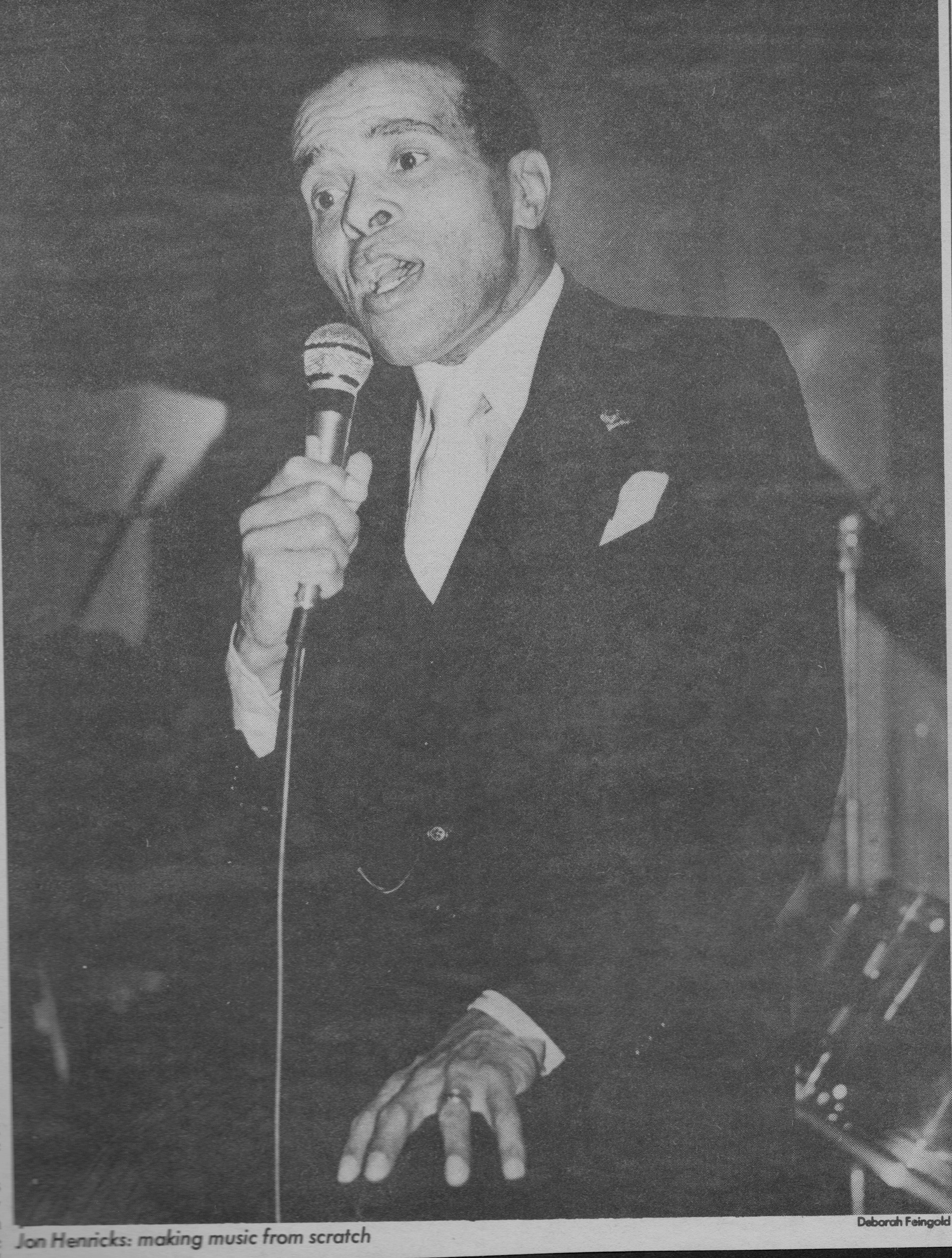 Jon Hendricks, the quick-lipped hipster whose witty way with words launched Lambert, Hendricks & Ross in the late ‘50s, returned to New York after a long absence for a week’s stand at Sweet Basil. For the first half of his show, Hendricks traced his career from a Toledo childhood in church to his five-year stay in London, where they voted him number-one jazz singer in the world.

He sang his theme song, “Tell Me the Truth,” “Sometimes I Feel Like a Motherless Child,” some blues and a medley of “In Fondest Mem’ries Of” and “September Song”; he introduced his daughter Michele, who sang “I’ll Remember April,” and his “spiritual son,” Bobby McFerrin, who sang “Satin Doll,” both youngsters exhibiting vigorous and individual scat-singing styles. Then Hendricks sang Antonio Carlos Jobim’s “Desafinado,” explaining that he was asked to write lyrics to the tune only after Johnny Mercer, Ned Washington and Hugh Martin declined the offer; it took all of 10 minutes, Hendricks said, and the proceeds put his kids through college. “Ah, the vicissitudes of creative life,” he sighed.

Singing solo, Hendricks was no more than pleasant, a polite crooner like, say, Tony Bennett. But when he brought on his wife, Judith, his daughter and McFerrin, standing in for his real son, Eddie, who was sick) to reconstruct LH&R, he unleashed his true genius. Hendricks didn’t invent the idea of setting words to big-band jazz arrangements and recorded instrumental solos – Eddie Jefferson and King Pleasure get the credit for that – but he perfected it. Besides the sheer visceral excitement of four voices straining against and merging into one another, Hendricks’ devilish arrangements of jazz standards like “It’s Sand, man!” and “Jumpin’ at the Woodside” generate awe at (I know this sounds corny) the miracle of music. There are four people up there not just singing notes but making music from scratch, lowly human voices producing a symphony of sounds, wrestling from chaos precision – and having fun, too.

With Hendricks walking all over the melodies, Judith wailing the high trumpet parts, and Michele and Bobby hugging the bop foundations, this foursome proved superior in both craft and jazzmanship to LH&R (groundbreakers at the time who now sound dated) or even Manhattan Transfer (who’ve made excellent records of Hendricks’ vocalese versions of Jimmy Giuffre’s “Four Brothers” and Weather Report’s “Birdland”).

Between sets Hendricks grandly received well-wishers in the hallway between the bathrooms and Sweet Basil’s kitchen. (“You’re getting’ preposterous around the circumference,” he told a tall, snaggle-toothed jazzman, who replied, “And ridiculous, too!”) It looks like his musical, Evolution of the Blues, which ran five years in San Francisco and another year in L.A., won’t make it to New York, but he’s working on another revue called Reminiscin’ in Tempo. When I wondered why he hadn’t made any records since the 1975 Tell Me the Truth on Arista, Hendricks unloaded a diatribe against Clive Davis (“He’s set the cause of jazz back 100 years. He wouldn’t swing if you hung him. I hate that motherfucker – and you can quote me on that!”) Oops. Well, someone ought to get Hendricks, Hendricks & Hendricks on record, anyway – they’re hot.