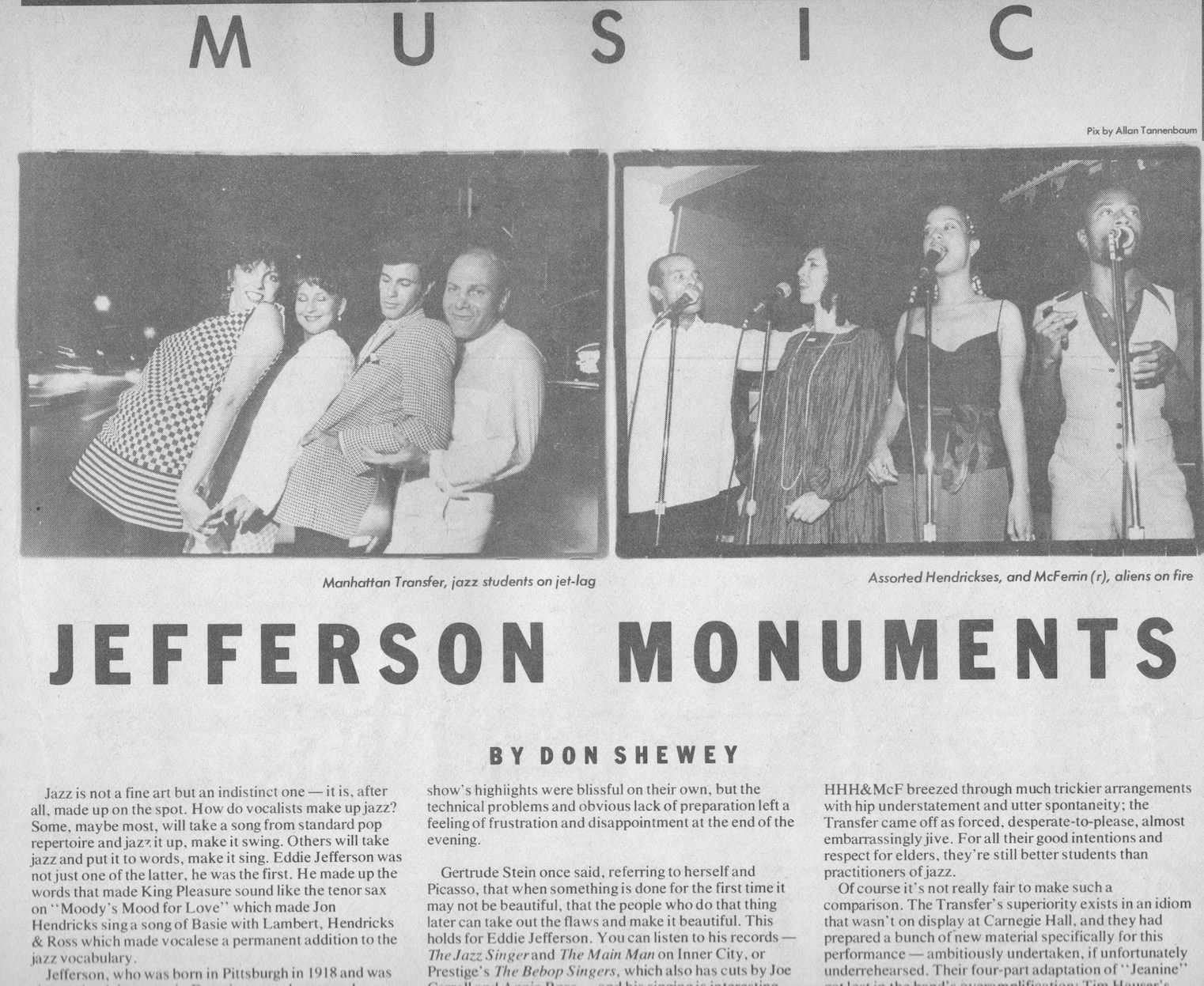 Jazz is not a fine art but an indistinct one – it is, after all, made up on the spot. How do vocalists make up jazz? Some, maybe most, will take a song from standard pop repertoire and jazz it up, make it swing. Others will take jazz and put it to words, make it sing. Eddie Jefferson was not just one of the latter, he was the first. He made up the words that made King Pleasure sound like the tenor sax on “Moody’s Mood for Love,” which made Jon Hendricks sings a song of Basie with Lambert, Hendricks & Ross, which made vocalese a permanent addition to the jazz vocabulary.

Jefferson, who was born in Pittsburgh in 1918 and was shot to death last year in Detroit, was a dancer and vaudeville-type performer long before he was a singer. So maybe it was fitting that the Newport Jazz Festival’s tribute to Eddie Jefferson last week at Carnegie Hall took the form of a vaudeville revue featuring a veritable cavalcade of musicians associated with Jefferson: James Moody, whose band Eddie joined a few years after “Moody’s Mood” took off in 1952; bopmaaster and legendary scat singer himself Dizzy Gillespie, representing the old guard of pre-vocalese vocal adventurers (he strolled out just once, to take a series of outrageous scat solos on “Oo Pop Pa Dah”); Jon Hendricks, with his group Hendricks, Hendricks & McFerrin standing in for LH&R; Richie Cole, the young alto player with whom Jefferson toured the last few years of his life; and the Manhattan Transfer, whose latest album Extensions is dedicated to Eddie and whose leader/founder Tim Hauser produce Cole’s new album Hollywood Madness, which includes Jefferson’s last recording sessions.

A special, unadvertised but thoroughly delightful attraction was Sandman Sims, introduced as “the world’ greatest living jazz dancer,” who performed two spectacular routines – a mind-boggling tape dance and a soft-shoe on a miked, sand-covered floor  — that were clearly his life’s work.

Like any revue, the Newport show had its ups and downs. The biggest downer was Ben Sidran, a terrible singer and mediocre pianist whose presence (i.e., his relation to Jefferson) was never explained. He came out after intermission and played almost half an hour of the sort of prefab cha-cha music you usually hear when daytime talk shows cut to commercials. Professor Irwin Corey also made a brief, bizarre but obnoxious appearance. In addition, the sound system was pretty poor throughout, and the format uncomfortably formal, making participants wait backstage between numbers and forcing prolonged entrances and exists. It would have been a lot more efficient and fun to have everybody sitting onstage the whole time and taking turns at the mike. The show’s highlights were blissful on their own, but the technical problems and obvious lack of preparation left a feeling of frustration and disappointment at the end of the evening.

Gertrude Stein once said, referring to herself and Picasso, that when something is done for the first time it may not be beautiful, that the people who do that thing later can take out the flaws and make it beautiful. This holds for Eddie Jefferson. You can listen to his records – The Jazz Singer and The Main man on Inner City, or Prestige’s The Bebop Singers, which also has cuts by Joe Carroll and Annie Ross – and his singing is interesting, clever, but not great. One important reason why Jefferson’s innovativeness is obscured in retrospect is that the seed he planted was brought to full fruition by Jon Hendricks, whose accomplishment in writing lyrics and vocal arrangements for jazz music is unequaled.

Hendricks emceed the Carnegie Hall concert, appropriately, and he delivered a running commentary on the heritage of vocalese, with sly impressions of Louis Armstrong (the father of scat) and Cab Calloway as well as references to Eddie’s mentor Leo Watson and King Pleasure. (No one ever points out – because Eddie was so sanguine about it – that Pleasure, who saw Jefferson perform at the Cotton Club in Cincinnati in 1951, essentially stole the lyrics and the credit for “Moody’s Mood for Love.”) Then, gracefully crediting his own entry into the field of vocal jazz, Hendricks brought out his daughter Michelle, his wife Judith and Bobby McFerrin for a segment that was one of the show’s peaks.

It was exactly the same set the foursome performs in clubs – three Basie numbers and an Ellington – and though I was hoping for something new, they couldn’t have done anything better. What these singers do together is a phenomenon unto itself. Bopping through the Basie band’s dense block chords, half-singing and half-chanting intricately interlocking sets of lyrics, they take their tunes beyond the cosmic comedy of split-second timing and the sensual splendor of precision harmonies into the realm of hypnosis and mysticism. One minute, they’re just regular people toodling swing variations on doo-wop; the next, they’re burning – just for a moment or two, it’s so intense it doesn’t last long – with the spirit of something unearthly, alien, impossibly out.

Perhaps the most interesting circumstance of the Eddie Jefferson salute was that it provided an opportunity to compare the Manhattan Transfer, foremost proponents of pop harmonies and lately aspiring jazzbos, with the Hendricks family, a “real” jazz group. It was no contest. HHH&McF breezed through much trickier arrangements with hip understatement and utter spontaneity; the Transfer came off as forced, desperate-to-please, almost embarrassingly jive. For all their good intentions and respect for elders, they’re still better students than practitioners of jazz.

Of course it’s not really fair to make such a comparison. The Transfer’s superiority exists in an idiom that wasn’t on display at Carnegie Hall, and they had prepared a bunch of new material specifically for this performance – ambitiously undertaken, if unfortunately underrehearsed. Their four-part adaptation of “Jeanine” got lost in the band’s overamplification; Tim Hauser’s scat duets with Ben Sidran (“What’s This?”) and Richie Cole (“Confirmation”) stayed decidedly earthbound, while Alan Paul – the group’s least jazzy singer – seemed plain bored with “The Common Touch.” Janis Siegel did do a nice instant replay of James Moody’s “Moody’s Moody for Love”) (with Moody, amusingly, doing the falsetto middle eight), and Cheryl Bentyne salvaged the set with a sweet, sure “Parker’s Mood” that caught exactly the quality of a horn player’s interior monologue turned inside out that Eddie Jefferson always wanted his lyrics to have.

It’s a good thing that I saw the Manhattan Transfer at Radio City last April and know how fantastic they can be when they’re not suffering from jet lag, equipment problems and artistic intimidation, because their showing in the jazz festival was unexpectedly second-rate. Still, they managed to pull off the show’s most direct and affecting tribute to Eddie Jefferson. Standing in cool blue spotlights, they crooned their recreation of Eddie’s first vocalization, Coleman Hawkins’ famous take on “Body and Soul,” slipping almost imperceptibly into swing-time when they came to Phil Mattson’s special additional lyrics:

And we’ve got to remind you

Many years it took him

Singing every day to achieve his first claim to fame

He was 20 years ahead of his time

And he knew it

But he kept right on-a singing…

Sang with Moody and Richie Cole

But his forte was the words he wrote to

Music that he sang

So he sang, and he sang

And he sang his words so clever

Suddenly, the evening made sense, we knew why we were there, and we were glad we’d come.