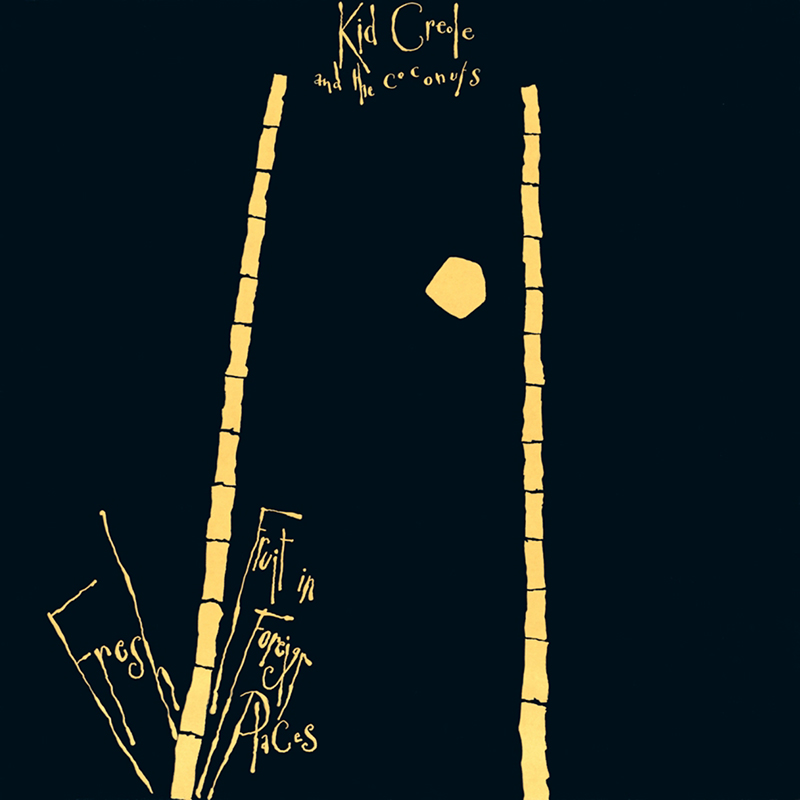 In its ideal form, Fresh Fruit in Foreign Places ought to be a splashy stage musical, one even more lavish than the topical revue that Kid Creole and the Coconuts have been delighting selected provinces with in recent months. For August Darnell – Kid Creole himself – has an epic imagination that transcends the aspirations of the most sophisticated rock show. Like Dr. Buzzard’s Original Savannah Band (of which Darnell is a founding member), Kid Creole and the Coconuts employ an exuberant fusion of rock & roll, pop, disco, swing, reggae and Latin music. On the new album, this eclecticism is an important key to the story: a hip, modern-day version of The Odyssey in which the Kid leaves Manhattan for a mad, year-long voyage in search of his estranged lover, Mimi.

The songs detail the adventures that Kid Creole, his trusty skipper Coati Mundi (aka Sugar-Coated Andy Hernandez) and their crew encounter along the way. Some of these scenes could come right out of Homer: a run-in with mulatto Amazons intent on miscegenation (“In the Jungle”), a dangerous lull on a beautiful island where the men almost forget about home (“Schweinerei”). Others are purely contemporary, both satirical (a mock-revolution in which blacks and Puerto Ricans battle for control of a radio station) and comic (Kid Creole is jilted for a mere ski instructor). The connections between the compositions are somewhat loose. In concert, the story line is filled in by rap monologues performed by the fabulous Gichy Dan, whose solo LP Darnell produced in 1979. Though there are definite musical highlights – the smashing “Going Places,” the eerie “Schweinerei,” and Coati Mundi’s delightful solo, “I Am” (prominently featuring the enchanting Coconuts as sort of goddesses-cum-cartoon-Greek-chorus) – none of the numbers on Fresh Fruit in Foreign Places is as exceptional as “Maladie D’Amour” or the title tune from Off the Coast of Me.

Still, what’s most impressive about this ambitious venture is its unity. The array of musical styles reflects the variety of the odyssey’s locales while simultaneously making subtle points about how easily music gets trapped in racial (racist?) stereotypes and how exhilarating, how liberating, this multi-ethnic mixture can be. The jaunt that Kid Creole and his crew take through such fictional lands as the Magwood Islands and the Iyo Republic might be construed as an amusing comment on the different worlds that exist within that crazy place called New York City. Also, the search for Mimi could in some way be seen as an interior search (for “me, me”). But most of all, this is a journey of the heart that has very satisfying literary and emotional underpinnings. The voyage ends fruitlessly, with the narrator writing an enigmatic letter to his housekeeper (the poignant “Dear Addy”), confessing: “I’m afraid I’ve lost more than I’ve gained.”

It may take some time to absorb the album’s density, but Fresh Fruit in Foreign Places is like a great love affair: when it’s over, you know you’ve been on a trip.