Elizabeth Swados’s Alice in Concert is such a strange creature that it’s hard to say exactly what it is. To be most charitable, one could say Swados has invented a new form for the theater – the “Meryl-cal,” any musical starring Meryl Streep. Streep is, as one of Lewis Carroll’s characters says about Alice, “as big as life and twice as natural,” and it’s almost frightening to admit that she can do just about anything you can ask an actor to do. She’s radiantly beautiful and glows ever outward, yet she also carries an aura of private mental industry – that of a preoccupied child, you might say. She engages in child’s play with total absorption and lack of inhibition; she’s noticed that children are often more serious and more physically contained than adults. Meryl’s miraculous, and it is as a vehicle for her that Alice in Concert is most significant. 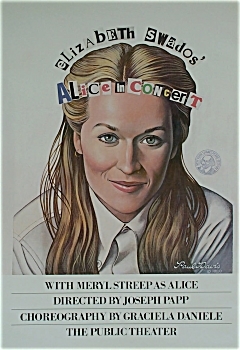 The musical itself, to be less charitable, is like a TV “After-School Special.” It’s rather simple-minded, musically naïve, relentlessly cheerful, broadly played in the manner of children’s theater and as colorfully designed as a kindergarten. Strictly speaking, the production at the Public is a concert version of a musical that doesn’t exist based on Carroll’s Alice in Wonderland and through the Looking Glass. Yet Swados scraps or scrambles much of Carroll’s narrative and has written music so aggressively incidental that it almost doesn’t exist. Joseph Papp has staged the show and Graciela Daniele choreographed it as a nonstop flow of 37 musical numbers that never quite coheres; it’s too lavish and mobile to be a real concert, yet it’s always holding back as if to deny that it is a real musical, Curious.

It’s not too difficult to see why Swados is attracted to Alice – Carroll’s multiplicity of characters and their zaniness and their flightiness would seem to match her eclectic sensibility as a composer. Swados’s blessing is that she is prodigiously talented; her curse is that she’s utterly undecided about what to do with her talent. This Alice is perfectly symptomatic of her confusion; it’s her schiziest score to date. She switches musical styles every other minute from chants to African rhythms to quasi-jazz to C&W to Hebraic cantillation to birdcalls to English folk balladry to parodies of the Hallelujah Chorus, Bob Dylan, Joan Baez, and Evita. The range may be impressive, but it’s shallow. Swados obviously plucks riffs out of the air and, in her neo-primitive way, uses them as is rather than crafting them for her purposes in a meaningful or original way.

This jittery naivete angers a lot of critics and reg’lar folks alike, who consider Swados a neurotic dilettante. And I must admit there’s something creepy about the group-therapy aspect of Alice in Concert. Swados conducts the piece from the front row of the audience, giggles and kibitzes with Streep midshow like a fight coach and takes final bows at curtain call, exiting hand-in-hand with her star. (You almost expect the cast to start singing “We love you, Liz,” and ask the audience to join.) But as much as I distrust her disdain for craft and – in this case – consider her lack of faithfulness to Lewis Carroll a mistake, I think Swados is a major talent who must be encouraged. Her songs are precocious and simplistic (“artless art songs,” my companion called them, not without admiration) but theatrical. Her best tunes here, like the best in her much-maligned Dispatches, swell and are thrilling while they play and then evaporate instantly, as ephemeral and beautiful and here-and-now as the best moments of pure theater. 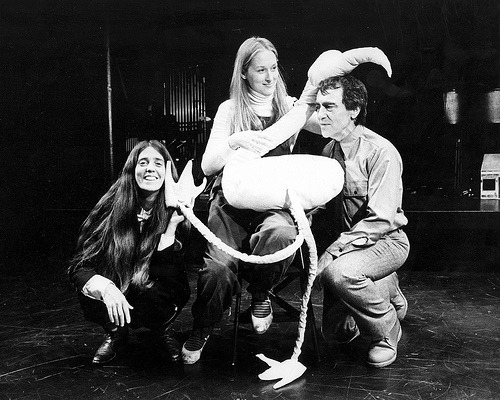 Alice in Concert is framed by two bits of typical Swadosiana. “What There Is,” based on a Kenneth Patchen poem, is first sung by Streep solo and later as a duet with Rodney Hudson (the best of a good though unobtrusive supporting cast); it’s the kind of song I just described, so gorgeous yet so seemingly spontaneous that one wonders how it can be repeated nightly. And the show ends with “What Is a Letter?,” a Socratic Swados original obviously influenced by the Nazim Hikmet poems she set to music in Nightclub Cantata. It ends:

What is life?
The Joy of the blessed, the sorrow of the miserable.
The expectation of death.
What is death?
The tears of the living, the thief of man.
What is man? A guest on this earth.

The sentiments are more Joseph Chaikin’s than Lewis Carroll’s, but I admire Swados’s insistence on reaching for the secrets of life – even though it more firmly brands the work as a strange, unwieldy half-breed.