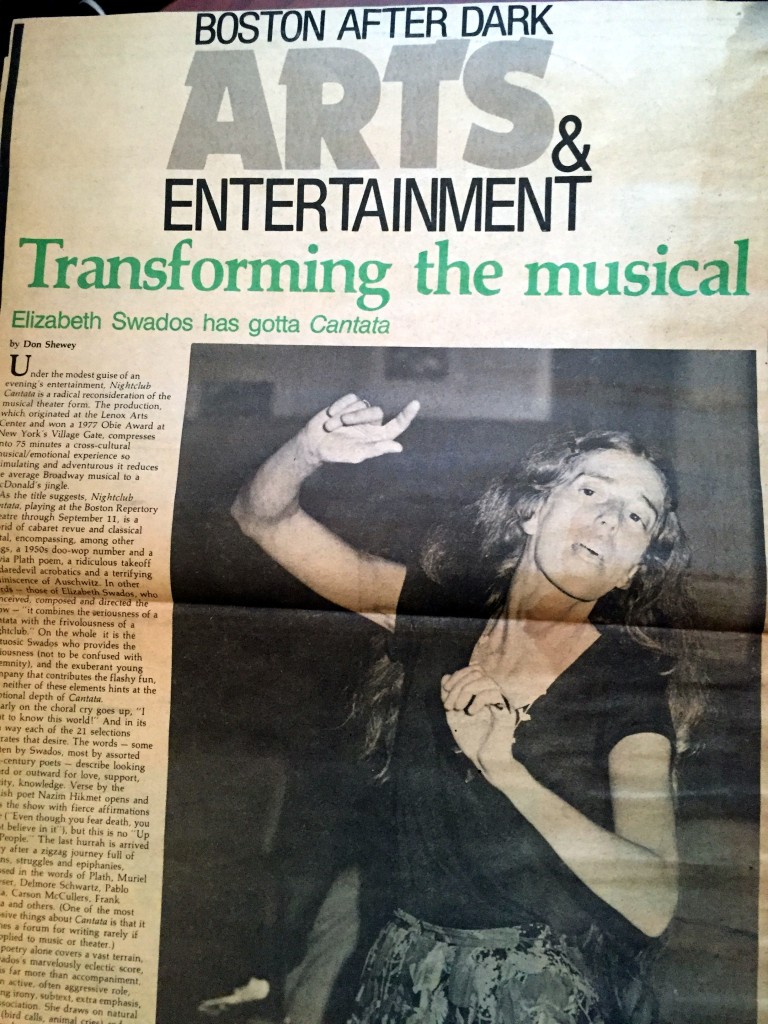 Under the modest guise of an evening’s entertainment, Nightclub Cantata is a radical reconsideration of the musical theater form. The production, which originated at the Lenox Arts Center and won a 1977 Obie Award at New York’s Village Gate, compresses into 75 minutes a cross-cultural musical/emotional experience so stimulating and adventurous it reduces the average Broadway musical to a McDonald’s jingle.

As the title suggests, Nightclub Cantata, playing at the Boston Repertory Theater through September 11, is a hybrid of cabaret revue and classical recital, encompassing, among other things, a 1950s doo-wop number and a Sylvia Plath poem, a ridiculous takeoff on daredevil acrobatics and a terrifying reminiscence of Auschwitz. In other words – those of Elizabeth Swados, who conceived, composed, and directed the show – “it combines the seriousness of a cantata with the frivolousness of a nightclub.” On the whole, it is the virtuosic Swados who provides the seriousness (not to be confused with solemnity) and the exuberant young company that contributes the flashy fun, but neither of these elements hints at the emotional depth of Cantata.

Early on the choral cry goes up: “I want to know this world!” And in its own way each of the 21 selections reiterates that desire. The words – some written by Swados, most by assorted 20th century poets – describe looking inward or outward for love, support, identity, knowledge. Verse by the Turkish poet Nazim Hikmet opens and closes the show with fierce affirmations of life (“Even though you fear death, you do not believe in it”), but this is not “Up with People.” The last hurrah is arrived at only after a zigzag journey full of tensions, struggles and epiphanies, expressed in the worlds of Plath, Muriel Rukeyser, Delmore Schwartz, Pablo Neruda, Carson McCullers, Frank O’Hara and others. (One of the most impressive things about Cantata is that it furnishes a forum for writing rarely if ever applied to music or theater.)

The poetry alone covers a vast terrain, but Swados’s marvelously eclectic score, which is far more than accompaniment, plays an active, often aggressive role, supplying irony, subtext, extra emphasis, cross-associations. She draws on natural sounds (bird calls, animal cries) and ethnic modes (Indian, Greek, Caribbean, tribal drum codes) as well as on familiar rock, blues and vaudeville forms to create a composite of musical fragments against which words or sounds are sung, chanted or delivered in unorthodox ways. The elements of Swados’s music, scored for piano, bass, and acoustic guitar, are not new, but their combination in Nightclub Cantata has few precedents, and Jacques Brel is not one of them. Virgil Thomson’s multi-flavored score for Gertrude Stein’s opera The Mother of us All and Richard Peaslee’s theatrical, word-based music for Jean-Claude van Itallie’s A Fable are apter comparisons.

Swados’s conceptual approach is unique in its incessant integration of words, music, and movement. A prime example is her treatment of Delmore Schwartz’s “In Dreams Begin Responsibilities,” Cantata’s longest and most ambitious segment. Sing-speaking the words and accenting them with simple but evocative gestures (as throughout the show, with impeccable timing), the cast dramatizes Schwartz’s surreal short story: a young man dreams he is in a movie theater watching a silent film about his parents’ courtship. The tricky problem of maintaining a tight dramatic focus while skipping through various levels of reality is solved largely by Swados’s musical manipulations. The recitation begins in counterpoint to a steady rhythm, switches to syncopation, then takes off into ricky-ticky silent-movie piano music, boogie-woogie, and finally a waltz. The music and text continually diverge and recombine without transition, preparation, or apparent logic, except that the result always seems appropriate to the moment.

The whole of Nightclub Cantata is like this: a barrage of images, musical patterns, visual embellishments and emotional disclosures. In her directorial debut, Swados has made staging choices as effective and as varied as her material. She doubles up actors for a split-screen effect, exploits the Rep’s quirky space by scattering the actors through the theater at various levels, drives the show at a brisk pace. Sometimes, indeed, it’s too brisk; insights speed by unheard, unabsorbed. The lack of breathing space is uncomfortable at first – one wishes for the luxury of a long, lush melody or some restful repetition. Cantata requires concentration, for Swados is intent on making every detail count, on staying “in the dramatic moment” – a phrase she often uses in discussing her music, and a perfect description of the point where Nightclub Cantata’s words, music, and actors converge.

The contribution of the Cantata ensemble cannot be overrated, for their energy, versatility, and craftsmanship – as much as Swados’s overriding sensibility – mold such incongruous stuff into a cohesive whole. (This is, for the most part, the original cast, for whom much of the material was specifically chosen.) Jossie de Guzman’s deadpan performance of the Grease-y “Indecision” is hilarious, and Rocky Greenberg exhibits a manly vulnerability, particularly in Frank O’Hara’s moving “To the Harbormaster.” Karen Evans’s reading of Plath’s “The Applicant,” set to African drums, is unforgettable. Clive Barnes got it right: “Evans, a statuesque black woman, has an enunciation that would crack a crystal glass and leave it glad.” Most outstanding of all is JoAnna Peled, who seems to ooze charisma from the very tips of her frizzy red hair. It would be worth sneaking up the Rep’s backstairs every night just to watch her solo performance of Cantata’s climactic number, Swados’s gypsyish “The Dance.” Standing center-stage, her hair wild from dancing and her eyes ablaze with conviction, she proclaims, “If the choice is to sit in the sand or to dance, why not dance, Mother, why not dance?”

At 26, Elizabeth Swados has already established a formidable reputation on the basis of her collaborations with Rumanian director Andrei Serban. His experimental stagings of Greek tragedies (Medea, Electra, Trojan Women, and Agamemnon, which is currently playing in New York’s Central Park) have relied heavily on Swados’s knowledge of non-verbal communication and ethnic musics to recreate the power of ancient drama. When the collaboration began, Swados was a 19-year-old undergraduate at Bennington College, where her all-American pop, folk, and classical background had been eclipsed by a passion for ethnic music. “Something in that music really moved me,” she recalls. “There was something dramatic in it that we didn’t have in our music.” Asked to score a Grotowski-style production of Everyman at Bennington, Swados created a sensation by incorporating the Indian and Polynesian music she was studying at the time. The success of Everyman led to an introduction to Ellen Stewart, founder of La Mama, New York’s experimental theater complex, and she in turn brought Swados to Serban.

“I felt like what Serban was trying to do with Greek was just what I had been looking for,” Swados says. “I was very willing to just learn and do what I was told, because I had access to a whole lot of strange music and I knew how to apply it to theatrical situations by some intuition. And that combination was good for what he wanted.” The 1972 Medea (which earned her an Obie) began a fruitful five-year period during which she collaborated with Serban on the tragedies, wrote incidental music for his productions of The Good Woman of Setzuan and The Cherry Orchard, toured Europe with several Serban productions, and traveled through Europe and Africa with Peter Brook’s Center for International Theater. She absorbed the work of these two major avant-garde directors and soaked up the music and language of various cultures.

In contrast to all this, Nightclub Cantata was “a rebellion,” Swados says. “It was a combination of paying respect to everything that I’ve learned from Brook and Serban, but it was also saying, ‘Enough of these classics! Let’s do something about people now.’ My whole sensibility has been based on non-verbal communication and ancient languages, and I don’t deny the absolute value of that, but I had to do something more political, more contemporary, something that relates on a more overt level.”

One wonders how the creator of such an uncommon musical entertainment relates to traditional Broadway fare. “I love it if it’s good. I can’t stand it if it’s bad. Literally, I get – you don’t want to print this, but I get diarrhea if I go to a musical that’s bad. I get so angry that head doesn’t register it – my stomach does and I have to leave and go shit my guts out. Because it’s more bad information going into the human system that’s already been poisoned beyond belief. There’s so much in American musical theater that’s just schlock that gets across as art because somebody can whip out an easy tune or has a cute psychological insight into sex or drugs or something modern like that. And they rip people off, because people see it and think, ‘Oh, I’m enlightened.’ There’s this kind of easy psychology that gets sent back and forth between audience and performer, and everybody gets away with nothing and nobody learns anything.”

Swados’s admirable resistance to “easy” music-making is also the source of her main limitation, one to which she readily admits. “I haven’t found a way to compose something with an extremely rich melody, a tune. I think it’s very important because it soothes people, but I always prefer a kind of percussive performance of things. I think because I’m young, I’m angry-ish, I’m a little nervous, my music tends to be overly energetic sometimes. I’ve just sort of snobbed myself out, and I’m working on that. The next project I’m doing is with kids – 16, 17, 18 – and I hope I’ll unsnob myself. I’ll be using whatever music they like: salsa, punk rock, whatever.”

Swados herself has performed in previous engagements of Nightclub Cantata, but she returned to New York after the Boston opening. There’s that teenage musical to be done, and besides, she needed to supervise the re-opening of Agamemnon in the Park. How absurd to imagine her shuttling between cathartic Greek chanting and nihilistic punk-rocking – and how exciting to think that a considerable part of the future of musical theater may rest in such a person’s hands.