In Bill C. Davis’s Avow, the new Off-Broadway play by the author of Mass Appeal, two gay Catholics who want to get married ask their baby-boomer priest to perform the ceremony. Davis’s comedy undertakes an unusually sophisticated and contemporary discussion of the traditional Christian virtue of faith. And that’s one of the things that excited Jack Hofsiss enough to direct the production, which opened July 27 at the Century Center in New York City.

Hofsiss, best-known as the 1979 Tony Award-winning director of the long-running Broadway hit The Elephant Man, grew up in Brooklyn, where he was trained by Jesuits in high school before attending Georgetown University in Washington, D.C.

“I learned from the Jesuits not just to accept what is given to you but to think about it,” he said in an interview during rehearsals for Avow. “There was a sense of questioning. They shared the fact that ultimately your relationship to God is your own thing, that you can be gay and have a relationship with the God of the Catholic Church. That’s one of the big issues in this play, the refusal of these guys to take second-class citizenship. Instead of saying, ‘My love precludes me from being a Catholic,’ to say ‘My love enables me to be a Catholic. My love is love. Love is God. God is love.’ That’s the journey.”

The 48-year-old Hofsiss, who now considers himself a non-practicing Catholic, has been on a remarkable journey himself. As a golden boy fresh out of Georgetown, he founded the Folger Theater Group (now the Folger Shakespeare Theatre). Producer Joseph Papp saw his production of Twelfth Night and invited him to work at the Public Theater in New York. Hofsiss started in the casting department at the Public, where he helped cast, among other shows, the original production of A Chorus Line and eventually began directing plays. When producer Richmond Crinkley, whom he knew from the Folger, sent him a play called The Elephant Man, Hofsiss recalled, “my life changed overnight.”

The play ran almost three years, partly because rock star David Bowie made his Broadway debut playing the title character halfway through the run. Hofsiss became the youngest director ever to win a Tony, and he made the A-list, directing movies, plays, nightclub acts, and opera. Then in July of 1985, he dove into the pool of his house on Fire Island and his head hit the bottom, fracturing his spine. He has been paralyzed from the waist down since then and gets around in a wheelchair, assisted by Maureen Laffey, who nursed him during his year-long recovery at the Rusk Institute.

His limited physical mobility didn’t dampen his mental agility or his quick wit — if anything, just the opposite: “One had to be more articulate, which is not a bad thing for a director.” The accident did force Hofsiss to make a choice between film and theater. He’s  worked steadily on plays (including such gay plays as Kevin Elyot’s My Night with Reg) and musicals. He received credit for co-directing (with playwright Richard Nelson) the Tony-nominated musical James Joyce’s The Dead last season, even though he left before it opened, an experience about which he is both dishy and diplomatic. “I learned to be careful about working with playwrights who have absolutely no respect for what a director does.”

Hofsiss is convinced that theater is an art form ideally suited to changing perceptions of gay people in American culture. “Theater deals with bigger and more complicated issues, because it’s language-based, rather than driven by visuals or plot or jokes. You can deal substantively with issues, because the theater is essentially a temple of ideas. For instance, in Avow, the gay characters relate to the straight characters very normally. I think the more you see a straight person saying, ‘How’s your boyfriend?’ the more normal it becomes. It’s part of life.” 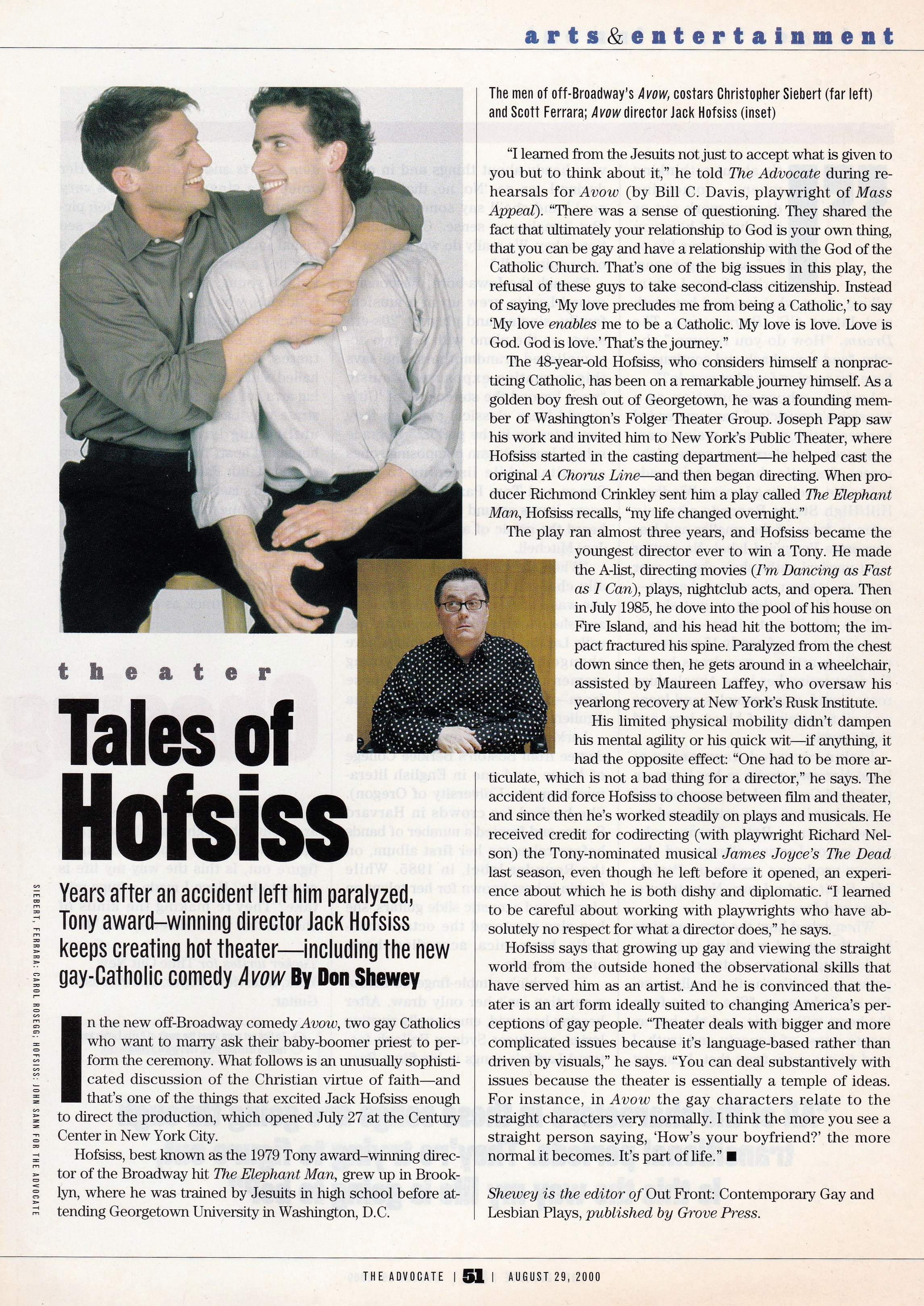