The Wooster Group’s legend as one of the world’s great theater companies seems to provoke both curiosity and anxiety in the uninitiated. For newcomers, the work-in-progress Brace Up! at the Performing Garage through March 9 is an excellent opportunity to find out what the group’s work is about. As usual, the point of departure is a classical play bounced off other radically different elements — Chekhov’s Three Sisters filtered through Japanese performance styles, Polynesian dancing, and a loosely autobiographical framework about a traveling theater troupe. When I visited, the group did only the first two acts of the Three Sisters, but it was like no other Three Sisters I’ve ever seen.

The title characters remained onstage at all times: efficient Olga, played by Peyton Smith looking like a TV anchor; Masha, played by Joan Jonas in a huge black picture hat with veil; and the youngest sister Irina, played in a wheelchair by 72-year-old Beatrice Roth with the distracted air of a woman in a nursing home, perhaps an aged actress recalling past triumphs. Meanwhile, the men were stationed at long tables behind the stage, coming forward only for select scenes. Willem Dafoe as Andrei put a fascinating spin on that character when he presented Irina with her birthday present, a framed photo of himself to which he’d taped a flyer saying “Gay Pride Run.” (Hmm…that could explain why his wife Natasha is having an affair, and why he’s so drawn to the old doctor Chebutykin, played in leather pants by translator Paul Schmidt.) One thing was clear, though. Just as Nayatt School showcased Spalding Gray, and Frank Dell’s The Temptation of St. Anthony threw the spotlight on Ron Vawter, Brace Up! is a star turn for Kate Valk, who serves as master of ceremonies, androgynously attired in a chopped-off black “Japanese” wig and a man’s suit (Dafoe’s costume from Route 1&9, actually). 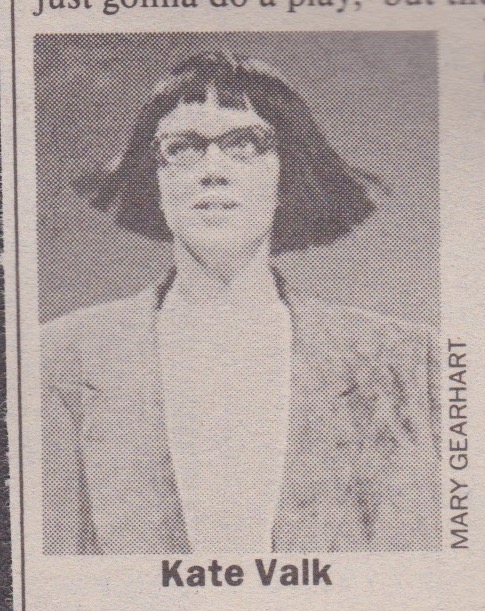 Valk’s description of her many-layered performance reveals just how personally the Wooster Group works. “We always say, ‘This time we’re just gonna do a play,’ but then we get interested in something else,” said Valk. “I can’t even say what that something else is, but for us the play is always just a device to show ourselves.” Her role corresponds to that of the maid in Chekhov’s play, she said when I interviewed her at the Garage one afternoon during wartime, which in turn refers to her own history with the Wooster Group. “I started off doing costumes, then props, then stage managing. Now that’s my role onstage.” But her performance is also based on two Japanese forms of presentational acting: the clowns in kyogen (the comic interludes in Noh theater) and the benshi (performers who narrated silent films and sometimes became more popular than the films’ stars). Japan became a fixation after Valk and director Elizabeth LeCompte stopped in Tokyo on their way back from a Wooster Group tour of Australia; the group spent a year studying Japanese movies (anything starring Toshiro Mifune) and tapes of Noh and kyogen. They used that research to create a mask through which to perform Three Sisters.

And why Three Sisters? “We wanted to do a play with big roles for women,” Valk said. It’s a source of some resentment that while the Wooster Group abounds with strong women — director LeCompte, producing director Cynthia Hedstrom, managing director Linda Chapman, dramaturg Marianne Weems, performers Valk, Peyton Smith, and Anna Kohler — it’s best known for launching the movie careers of The Guys. That tension becomes part of the subtext of Brace Up! “At the end of Three Sisters all the men are gone, and that’s our reality here at the Garage — the men come and go more than the women.”

The fallout continues from the premature closing of Martha Clarke’s Endangered Species at BAM last fall. Love and Science, Richard Foreman and Stanley Silverman‘s new musical for Lyn Austin’s Music-Theatre Group, was supposed to have a six-week run at St. Clement’s Church this month and then play at the Seattle Repertory Theater, which contributed $40,000 to developing the show. When MTG’s projected income from Endangered Species evaporated, Austin could afford only one week of performances (January 29 through February 2) for invited audiences without proper sets or lighting; without a full-scale production to transfer intact and with the director unavailable for further work, Seattle Rep canceled the show “acrimoniously,” says artistic director Dan Sullivan. It might be rescheduled next season if Foreman’s schedule permits. If not, says Sullivan, uttering the words every producer dreads to hear, “we want our money back.”

It’s a shame, because Silverman’s score (exquisitely played at St. Clement’s) is one of his best, and Foreman’s text is a surprisingly accessible fairy tale, complete with a magic radio and dancing bears. Despite what Silverman calls “personal hysteria and anger,” the creators have been very adult about the snafu. “Yes, we suffered because Lyn invested all her hopes in Martha’s show, but I’m honestly not angry or upset,” says Foreman, who’s about to go into rehearsal for his new Ontological-Hysteric play, Eddie Goes to Poetry City, which opens at La Mama March 28. He’s already planning his next musical, a collaboration with William Finn called Eating Yourself Alive, which Music-Theatre Group will produce this summer. “I think Lyn is kind of heroic,” he says. “If only there were more producers in the American theater who would move heaven and earth to get shows done.”